Construction inductions have long been the backbone that safety systems have relied upon for a large portion of their worker data. Yet, inductions have hardly undergone any significant transformation since they were introduced in the 90s - until now...

Over the past decade, the digitisation of inductions has become commonplace (you're welcome). However, we believe we can continue to set a new standard for productivity and safety on job sites by taking inductions a step further.

With our new Inductions feature, you still get to keep your beloved location-locked site inductions, but we've added a few things to make your induction experience even more impactful. Instead of putting PowerPoint slides in a web app, we've built the most comprehensive solution, powered by an all-new Module Engine.

You asked, and we have delivered. With the industry standard shifting to a combination of company and site inductions, construction companies have continuously been forced to choose between the two due to lagging technology, but not anymore!

We've added an offsite inductions feature where you can send out a request to workers to complete your company-wide induction before their first day on site. As a result, your Company Induction becomes the first of a combination of induction 'modules' you can create for sites.

Sometimes there are moments on site where you need people to amend an induction form after people have filled it in. One example is forgetting a question, and now you're worried about compliance or the hassle of re-inducting a bunch of workers. With our new inductions feature, you can edit the induction form to include the new question. Everyone who has already completed an induction will be placed at 'partially inducted' status until they've resubmitted the form. Anyone who hasn't completed an induction yet will be shown the new form with the new question. Simple as! 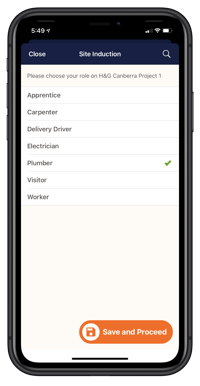 The other innovation we're making to inductions is to be able to create additional induction 'modules' and to be able to restrict who they get sent to. This feature can be used in a huge amount of ways, but these are two of our favourite uses cases identified by our Innovation Partners:

Firstly, as a role-specific induction. If there are questions you would love to include in your inductions, but they aren't relevant to half your workers, now is your time to shine! For example, you can create a specific induction for trades engaging in high-risk activity, one for apprentices or even an induction specifically for subcontractor supervisors. We believe that the future of safety/safety technology means tailoring safety systems and messaging for groups and individuals. We want to give you a flexible tool that you can use to communicate more effectively with select groups and collect the data you need. 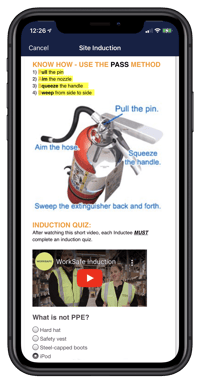 Secondly, we want you to be able to use inductions as a training tool. One Innovation Parter suggested that site teams use inductions to reiterate safe work practices following a near-miss or an incident. Depending on what you need, Site Managers could send the new induction module to everyone on-site or just a select trade. Alternatively, induction modules could be used to preemptively remind people of appropriate PPE or as a refresher of the site rules. Where ever you identify an opportunity for a micro-moment for safety, modular inductions get you there.

At SignOnSite, we believe in building flexible tools that can work with the natural routines of any site. We can see the potential in a system as commonplace as an induction, and we're excited to be at the forefront of building tools to help make your sites safer and more efficient. We look forward to seeing the creative and innovative ways our customers drive safety in the field with our new induction tool!

SignOnSite Webinar: Connected Workers - The Next Evolution In Construction Technology

Webinar: How Digital Permits-to-Work Will Change Construction in 2022

Join the webinar, starting at 11am AEDT* Thursday 20th January 2022. In the construction industry, having an electronic Permits ...
Start Reading